A voice for the voiceless: Non-profit leader helps empower community

WINSTON-SALEM – When asked what Twana Wellman-Roebuck wants her legacy to be, she pauses. “I want my legacy to be that I was the voice for the voiceless. I want people to say, ‘She cared.’” As a woman in leadership as the Executive Director of Experiment in Self-Reliance (ESR), Roebuck has spent nearly 23 years doing just that – demonstrating compassion for others and being a voice for low-income residents in Winston-Salem/Forsyth County.

But her journey to build her legacy didn’t start when she became the leader of Forsyth County’s only Community Action Agency. For more than forty years, Roebuck has dedicated her career and volunteer service to teaching, convening, and advocating for the needs of others. 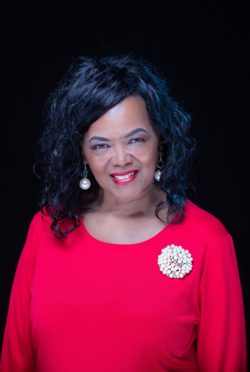 In fact, Roebuck never dreamt she would be the Executive Director of a non-profit when she was growing up. “I didn’t know what being a leader was. In my family, we just did stuff. And you did stuff until you completed it.” Roebuck says. But no matter what, Roebuck remembers, she was going to be successful. “Not everyone in my family went to college but there was an expectation that you would be successful. Now, no one defined what successful meant, but you were going to make something of your life and that was the expectation.”

Raised by her grandparents in rural North Carolina, Roebuck grew up as an only child surrounded by strong, empowering women. “My role models growing up were my grandmother, Mrs. Julia Burton Cash, who helped to raise me, and my aunt, Mrs. Shirley Cash Lester, my personal elementary school teacher and commander of the English language,” says Roebuck.

Her Aunt Shirley was not only her aunt, she was like a second mom, lived next door, and was her elementary school teacher. “She taught me English,” says Roebuck. “At our house, you did not split a verb. You didn’t split a verb walking through the house. You didn’t split a verb at the breakfast table. So walking through the house, there was a correction of your English,” Roebuck remembers, laughing. “So I think today because of my Aunt Shirley is why my language skills are as well as they are.”

“[My grandmother and my aunt] taught me the meaning of being a strong Christian lady with a voice and vision that I could become a teacher, leader, mother, and wife with dignity and grace. I think all of my upbringing as a child and certainly being an only child taught me to be very independent and the examples that I had around me of women taught me to be strong-spirited and to try really hard to do the best I could.”

In addition to her grandmother and aunt, Roebuck’s 7th grade teacher contributed to her strength and self-empowerment. “I had a wonderful teacher in 7th grade in junior high when we were integrated. Her name was Ms. Spencer – a very polished and very poised African American lady,” she remembers. “We had had a test and I didn’t do very well on the test. [After class,] she said, ‘You know, I believe, and I want you to believe that you can do better than this. Perhaps it was something I didn’t teach well, or you didn’t understand. You can stay after school and we can talk about it.’ And I did stay after school and she gave me some pointers on things that I missed. Because of her encouragement, I studied, and I began to do better. I wanted to show myself that I too could get an A [like my friend]. And so I began to study. It improved my writing skills and I ended up getting an A in that class. But it was because my teacher believed that I could do better, and she told me that I could do better, and I believed her.”

Growing up, Roebuck wanted to be a teacher and make an impact in peoples’ lives, just as her aunt and 7th grade teacher did in her own life. “My aunt was a teacher. I had bunches of aunts and uncles that were teachers. All I wanted to do was teach.” After graduating high school, she enrolled at Winston-Salem University to pursue a degree in teaching. Following graduation, she taught at a private school, which eventually closed. “All of a sudden, I was unemployed. Young, newlywed, unemployed,” she remembers. “About the only thing we had going for us is that we both worked, and we didn’t have children at the time.”

Thankfully, she was able to get a management position at Eckerd Drug Store. After spending some time working there, Roebuck transitioned into the role of Assistant Director of Community Outreach at Bethlehem Center where she was charged with directing 4-H Programs and Girl Scouts in Happy Hill Gardens and the Kimberly Park community. There, she introduced young minds to new opportunities. “Watching their faces as they accomplished new task was phenomenal,” she remembers. “It was my first introduction to working within a nonprofit and I have continued in that sector.”

While at the Bethlehem Center, Roebuck took advantage of opportunities for growth. “I took a workshop a public speaking workshop [and other classes through the United Way of Forsyth County]. They offered classes for non-profit people. I ended up being offered a position at the United Way,” she remembers. “As I worked my path at the United Way, I learned what leadership was. United Way sent me to various classes through an institution that they had for training, fundraising, grant writing, and all those things, and so my career grew.”

It was about that time in her career Roebuck was forced into independence. Having gotten married directly after college, Roebuck had not experienced independent living as it related managing money, paying rent, and buying a car. So when her marriage ended, she was forced to find housing for herself and her two kids.

“I remember crying through the application process. Not so much worrying about being able to pay my rent. It was more or less – it was a reality that ‘Wow, I have never done this before, and I don’t know what I am doing.’ It fit my budget because I am always mindful of that, but just that whole write my name on a rental agreement. I had never at age 40 experienced that.”

But Roebuck found strength in the relationships she built to get through the difficult times. She brought her administrative assistant – someone who had more experience with locating and securing housing – to help her through the process, and she brought her friends with her to help her through the divorce proceedings. “[My friend] said, ‘OK, this is happening. Go ahead and cry… here’s some tissue. Let’s keep it moving.’ You need those relationships in your life. My church family was a huge wraparound service for me. I knew nothing about a car. Fortunately, I had a maintenance staff person at the time that said to me, ‘Twana you need new tires. They are looking sort of bald.’ ‘Yes, sir. Tell me where to go buy them.’”

“Going through a divorce and getting my own housing – what I gained from that is, pick yourself up, cry a little bit, but you have to go on. You have two children – one in college and one in high school. You don’t have time to cry. So I picked myself up, developed a strategy, just like I do at ESR – this is our plan of action – set my two sons down and said, ‘Yo, we are on a budget. So if there are any expenses in college, any book you need, you need a new tire: we have to plan that in advance. Let me know. You just can’t walk in here and go, ‘I need a new book.’ Because there’s not a second income, it’s me,’” says Roebuck.

“And so I can relate to that mom that is living paycheck to paycheck. To meet all the expenses and the obligations to make sure your household is good, and your children are well, and you’ve got groceries on the table.”

on her path to ESR

As Roebuck was developing skills and overcoming obstacles, a path to her current role at ESR was being laid. While conducting a board and staff assessment on ESR during her time at the United Way, Robert Law, the Executive Director of ESR at the time, retired. One of Roebuck’s mentors encouraged her to apply for the position. “It’s your time,” Roebuck remembers them saying. She applied, “and lo and behold, I ended up getting the job. Again, someone believed that I could do it… and I’ve been here ever since.”

on passion, compassion, and impact

Roebuck is glad to be able to offer services at ESR to people who are experiencing situations similar to what she went through as a single mom. “The majority of our clients are female head of households. I think it’s extremely important for women to have the knowledge and be able to navigate their financial whereabouts and their financial capacity to be able to manage their households as well as to effectively manage their monies so that they can cover their expenses,” she says. “But also, with knowledge, it will be able to affect generational poverty. So when a female head of household is knowledgeable about their finances, they then can teach their children.”

She also channels her passion for teaching into the mission of the organization. “I have a personal motto: ‘When people know better, they do better.’  This resonates throughout my personal life and business; education is key to understanding our cultural differences, managing our finances, and effective communication.”

Roebuck’s family owned land in three different counties in North Carolina, so early on, she understood the value of owning an asset. “We were farmers. So we grew up really hard. I was young but I remember hanging tobacco leaves so they could go on the stick so they could go in the barn for the tobacco to be cured.” So offering opportunities to help people build assets through ESR programs was a no-brainer to her.

“The understanding of the importance of owning your asset as a female and certainly the other side of that is preparing a female to understand the importance of long-term financial stability. That relates specifically to having a retirement plan, having a college education plan for their children, as well as possibly for themselves. I would like to promote to women the importance of asset development as opposed to consumption of debt. Through our programs and what has kept me at ESR is the fact that we are able to promote the importance of providing an avenue so people can learn better so they can be better and impact generational poverty within the household,” says Roebuck.

Her joy for teaching doesn’t stop with ESR clients. Just as she has been on the receiving end of mentors through her life and career, she serves as a mentor to others. “Women can gain so much knowledge by serving as a mentor to other women. Why should a person fall in a ditch when someone can tell them what’s ahead or share their personal experience? When you are striving for your purpose, reach back and bring somebody with you. Hold someone’s hand as they go through their journey in life.”

“It doesn’t matter how big the agency or how good you are. If you don’t have the compassion and the ability to listen to the heart of the person – it’s hard to admit that you need help. When a person humbles themselves enough to come to us and say, ‘I need help,’ I want us to do whatever we can with kindness to help somebody.”